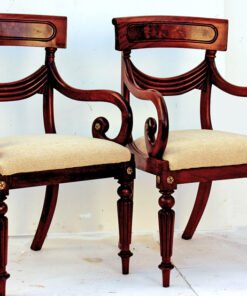 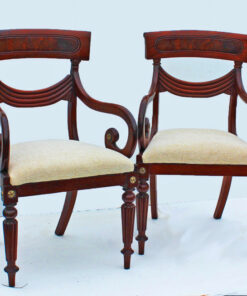 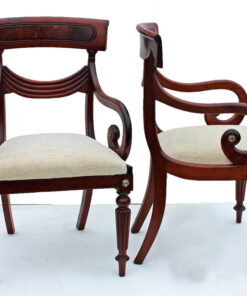 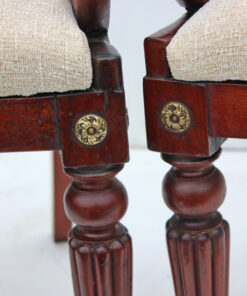 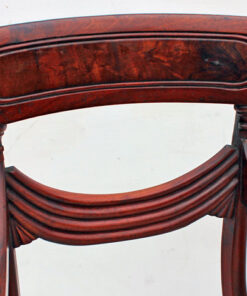 This pair regency carvers came to us from an auction in Bath UK. They had been in the home of an eccentric solicitor connoisseur.

The mahogany frames have drop-in or loose seats. They have been newly upholstered by us.

The term “carver” is an Americanism and a more correct name would be elbow chairs. The style is neo-classcial which was an evolution from the renaissance that first started in Italy at the end of the fifteenth century.  The renaissance movement gradually spread north developing regional differences as it did.

They have Vitruvian scroll arms: Named after the architect Marcus Vitruvius Pollio, the pattern was revived in the early Georgian period. The swag form in the back mid-rail is one of a couple of design motifs introduced into English furniture by Robert Adam after his return from Italy in 1760.

The turned and reeded front legs suggest the transition period of late regency to William IV in the post Napoleonic war revival.

The tops of the front legs and the arm scroll cores are embellished with applied cast brass  patera.

The back crown or top rail is veneered with a figured Cuba mahogany veneer. It is applied with a cartouche cut into the front curved surface of the crown rail.

There are a few bumps and scrapes and some minor repairs. This is to be expected in furniture, especially chairs that are about two hundred years old

Carvers of this type are traditionally Mahogany.  Mahogany itself appeared in English furniture in the 1720s as a substitute for imported French Walnut.

Pairs of regency carvers have become quite scarce in recent years. They used to be relatively plentiful but the antiques trade often prefers to split sets to make more profit.

You can find lots of information about regency furniture styles on the internet for example https://www.britannica.com/art/Regency-style 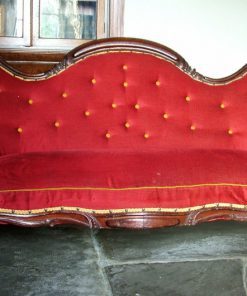 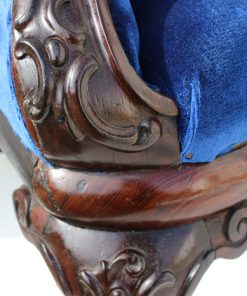 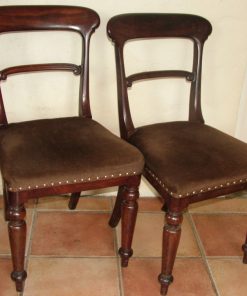 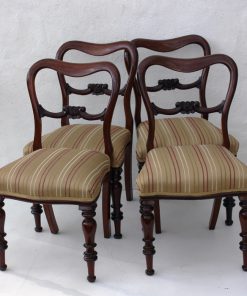 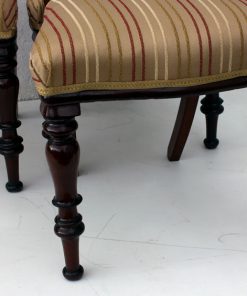 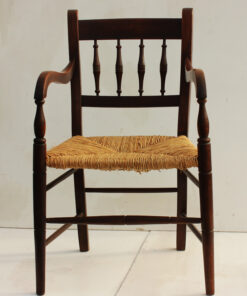 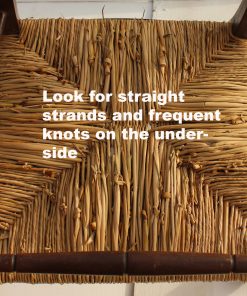